Around the web many people have started gathering information and documenting Hollywood Cemetery.
Credit must go to Judy K. Brantley/Wilson, who has done a yeoman's job posting Hollywood burials at findagrave.com. 3,498 names have been posted so far.  Without Judy, I doubt I would have figured out I had family buried there as quickly as I did. She's performed an amazing service, and is leaving a record future genealogists and historians will be very grateful for.
Larry Felton Johnson photographed parts of Hollywood Cemetery in 2007 and his blog posting has served as a meeting ground for several of us.
This article from 2002 in the Atlanta Jewish Times does a fantastic job explaining how Hollywood Cemetery devolved into its current state, the ineptitude of the current owners, and why the state of Georgia can't do anything about it. The article discusses how parts of the land have been sold off over the years (for taxes) and one parcel sold contained graves. Lovely.
The Secretary of State's office will probably do very little to help us, since Hollywood is a non-perpetual care cemetery (see ex-SOS Cathy Cox's statement in the above article), so I think the Georgia Department of Natural Resources Historic Preservation Division might be our best hope for help.
Do you know of any other helpful links? Please post them in comments and I will add them.
Posted by Tracie Harris at 9:47 AM 2 comments:

Many of us are floating around the edges of genealogy and graving websites, attempting to figure out just what to do next. It is a daunting prospect. I used to teach in the area, and knew that Hollywood Cemetery was bad, but had no idea just how bad it was until I visited recently (and ran into a couple trying to locate their family's graves). Bad doesn't begin to describe it. Horrific is a much more appropriate adjective. Trash, reforestation, abandoned road ways, fallen monuments abound. Vegetation has grown so think that stairs and walls are completely covered. And sadly, you can make out that the landscaper was probably genius, because you can still make it out how he terraced a very large hill into workable plots and roads. Someone spent a lot of time and money designing Hollywood Cemetery originally, and there are some beautiful examples of headstones to be found still. Actually, I have a feeling that the forestation might have saved the headstones from vandalism, just because it is so difficult to access much of the cemetery.

There are three cemeteries on Hollywood Road that are connected. If you drive down Hollywood from Hollowell (which used to be known as Bankhead Highway) you will first see a well maintained cemetery on a hill on your right. That is Monte Vista. On your left is a terraced cemetery with the first few rows in acceptable condition and the back rows reverting to forest. That is part of Hollywood Cemetery. On your right is a forest with a set of stairs. Look closely. There is a sign that says "Non-Perpetual Care". Yeah, no joke! Next you will see a road on your right, turn there to enter Hollywood Cemetery. If you stay straight on Hollywood Road you will next see a flat cemetery, level with the road, where the grass is at least cut. That is Magnolia. Magnolia has suffered from vandalism and neglect over the years (I can't find my great-grandmother Mary Camp Mooney's headstone, although my grandmother clearly remembers her having one), but is in better condition.

All three of these cemeteries are "operated" by Lincoln Cemetery. Monte Vista is a perpetual care cemetery where they still sell plots and hold burials.

Please spread the word, and let's get something organized.
Posted by Tracie Harris at 9:28 AM 4 comments: 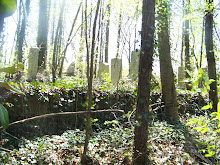